Youtube's algorithm recently surfaced a whole bunch of videos on photographing landscapes under the stars (particularly the Milky Way). I've played a bit with this before - but decided it would be nice to try it again.

To that end I dug into what sort of small tracking head I could get. It looked like it was either the Sky-Watcher or iOptron as a starter. Both have a large and a small unit, in both cases the small unit couldn't take the weight of one of my cameras. It then came down to availability - and I was able to get hold of the Sky-Watcher Star Adventurer kit.

So - on a quick visit down to Femsjøen for a few nights this Easter I've been testing the Star Adventurer.

The following shot was taken using 10x 2 minute tracked shots stacked with Starry Landscape Stacker and then photoshop to merge in an untracked (and therefore) unblurred foreground.

There is a fair amount of light pollution, you can see the glow nearer the ground. This is unavoidable at this location sadly (Light Pollution map), but if you look closely you can faintly see the Milky Way arcing across from left centre down behind the foreground front and centre. 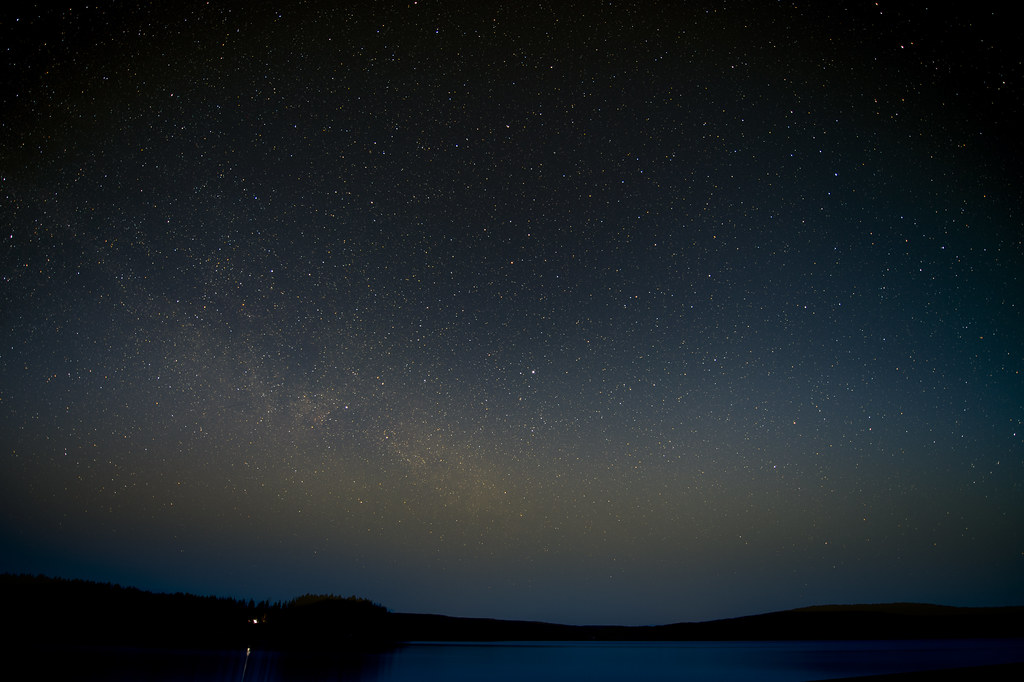 The second evening - I decided to test something further away. I had no idea if this was going to work. Basically it was the sony 100-400 out at 400 f/5,6. I had googled "easy deep sky photography" and it had given me a list of different objects - most of them messier objects.

I followed some advice and chose Messier-101 - the Pinwheel Galaxy.

I struggled a bit to get good polar alignment. I find that the reticule in the star adventurer is hard to see. It could be my eyesight - I adjust the diopter on all my cameras - and the tracker doesn't have this adjustment. I also found that the illuminator didn't illuminate enough. However - it could simply be that it was cold and I didn't use enough time. One thing that should make it easier is to get a 90° eyepiece - bending down to look up at a 55° angle isn't that comfortable. I may also try 3d printing a glow in the dark illuminator at some point.

However - I was not able to go longer than 10 seconds per shot.

It could definitely be improved - longer exposures would give less noise (so - better polar tracking). It's also affected by the light pollution here - I had to remove a deep colour cast of the sky in photoshop due to this.

But that's a real galaxy! - seriously - when I saw the shot for the first time come together in the stacker that's exactly what I was thinking. I can see how this can get addictive.